Hoseyn Ali Montazeri was a moving spirit in the 1979 revolution which created Iran’s Islamic state, and was at one stage set to become its leader.

One of Shia Islam’s most respected figures, he was also a leading critic of President Mahmoud Ahmadinejad. 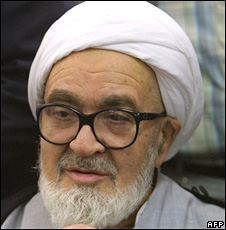 The BBC’s Jon Leyne says the death comes at a crucial time in a standoff between the government and opposition.

Iran’s rulers will now fear the opposition may attempt a big turnout for his funeral on Monday and other ceremonies marking his death, especially in the run-up to the Shia Muslim festival of Ashura on 27 December, our correspondent says.

Hamedan Province (استان همدان‎) covers an area of 19,546 km² and lies in an elevated…

As a New Zealander, Iran is a deeply mysterious country. It’s cliched to talk about…

In harmony with the rebirth of nature, the Persian New Year Celebration, or Norooz (نوروز),…

IranMap.com – Information, Map and GPS map of Iran and its cities
Get In Touch
IranMap Copyright © 2017 All Rights Reserved .
Back To Top